By chance, or synchronicity, my friend in Memphis and I discovered (on the phone) we were going to watch the same movie last night, the 2010 South African film Life, Above All. Our reviews this morning (via email) were similarly in tune: we loved it.

Set in a township outside of Johannesburg, it reads as an indictment of South African President Thabo Mbeki and his administration (1999-2008) for failing to address the HIV/AIDS epidemic in his country, denying its existence, rejecting treatment for the infected. Hundreds of thousands died every year, were shunned and exiled to remote areas to die. To this day, South Africa has the largest number of people with the disease, nearly 6 million. One in three women ages.25-29 is infected. There are 2 million AIDS orphans.

There is not a mention of political evil, however, in the film. Instead, the story focuses intimately on a 12 year old girl, Chanda, as she fights to keep her family together after the death of her baby sister. The death is the first indication of the coming cataclysm. Superstition and fear turn her neighbors against the family.

The friendship that is at the core of this film is one of the loveliest I’ve ever seen. Chanda’s friend Esther has been orphaned by AIDS, is herself shunned, testing their relationship. And Khomotso Manyaka, who plays Chanda and Keaoboka Makanyane, Esther, are fine, fine actors. Get the DVD or download immediately. 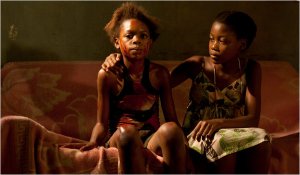